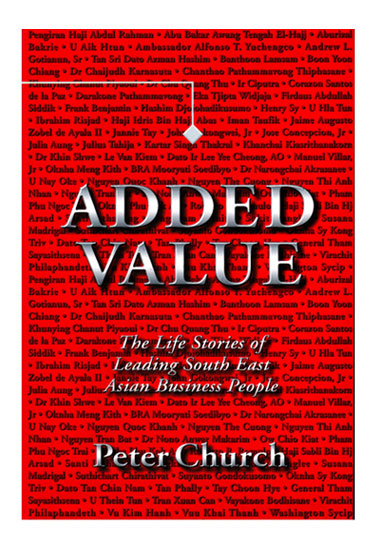 This uplifting book provides hope and guidance for businessmen and women of all ages as well as for those about to embark on a business or professional career.

It details face-to-face interviews the life stories of leading businessmen and womenh throughtout the ten countries of South East Asia (ASEAN) and their own secrets of success.

It is not a book about the rich and famous, although many of those interviewed are both, Rather, it is about the paths they have followed during their lives adding value to their business and professional sectors and, in many cases, to their nations.

Many have been badly hurt by the current economic crisis but their life stories show that many have faced adversity before. Indeed, many started on their paths to success at earlier times of economic and polical disarray and after the Great Depression, the Second World War and the fall of national leaders such as President Sukarno of Indonesia.

"A necessary textbook or manual for getting a better and rounded understanding of the dynamics of doing business in recovering Asia . . . incredible reading". — The Hon. Tim Fischer, MP, Australian Deputy Prime Minister and Minister for Trade.